Let us show you the LTS-Base®-Hybride-Abutments with all of it´s advantages.

LTS-BASE® offers you the advantages over conventional adhesive bases or hybride abutments on straight titanbases: 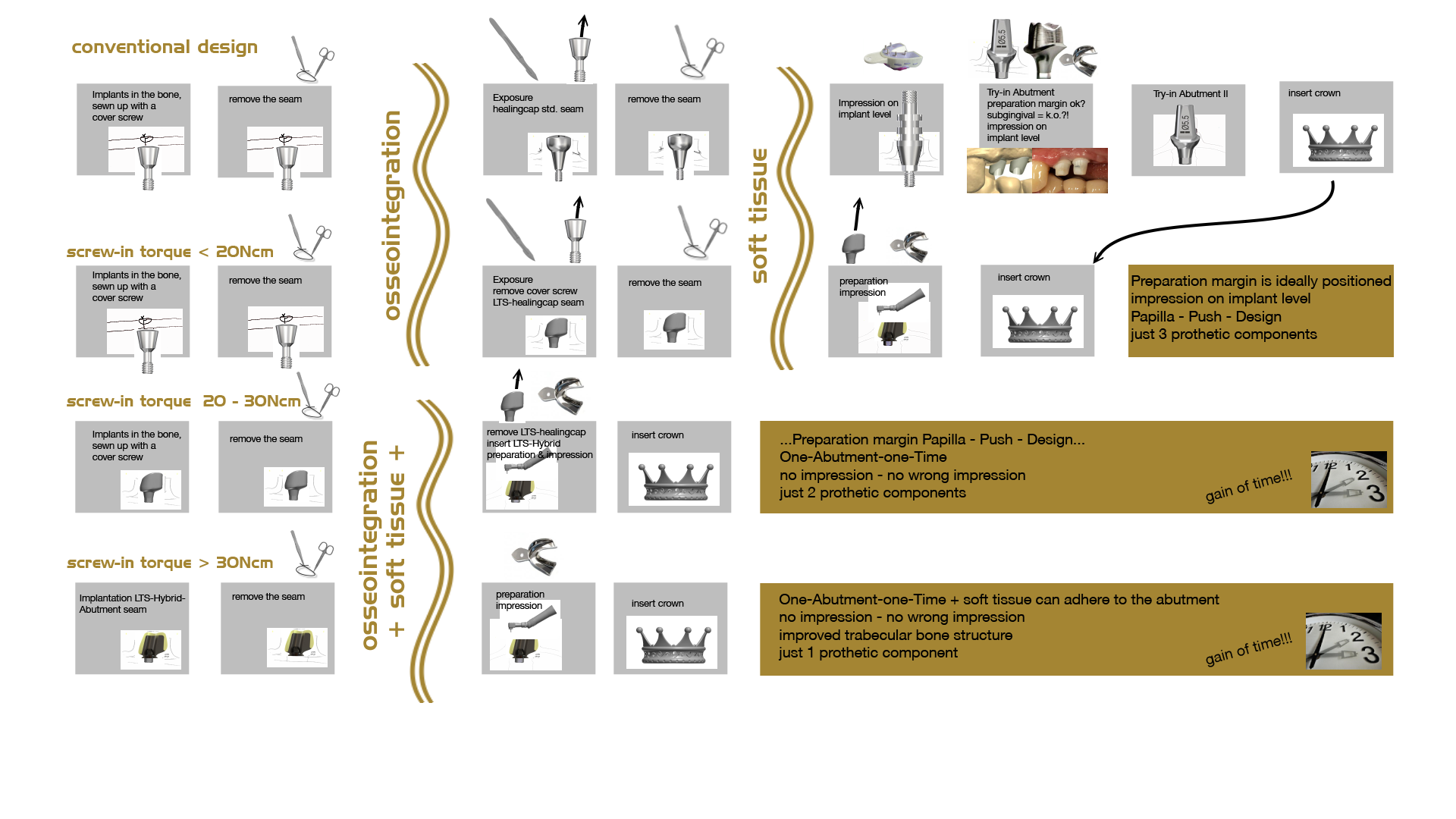 The number of necessary attendances from implant-insertion until the implantation of the implant crown and the total time for treatment can be reduced significantly by using LTS-hybrid-abutments. A complex three-dimensional individualization of healing caps for shaping the gingiva may be dropped due to the fact that the LTS-BASE® has already been integrated. In surgical practice several implant-systems are usually applied.

As the LTS-BASE® is available for several implant-systems, a prosthetic rethink for the dentist is not necessary. The ceramic adhesive bodies are standardized and fit on any offered LTS-system with a similar diameter.

The esthetic result is considerably improved by the insertion of three-dimensional prefabricated components designed to resemble the anatomy of natural teeth. A time-consuming anatomic shaping of the gingiva by individualizing the healing cap may be dropped. The mucosa average profiles of the abutments and healing caps are designed consistently to the latest clinical requirements and consider both a more oral implant-position and platform switching. The dental technician receives more space for the setting of a ceramic veneering through the angulated screw channel. 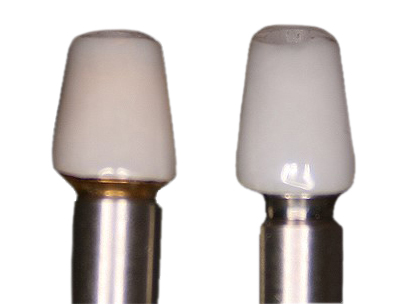 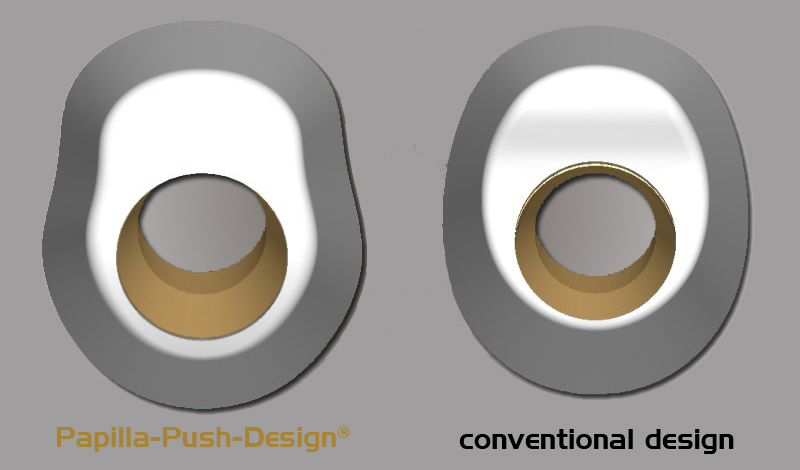 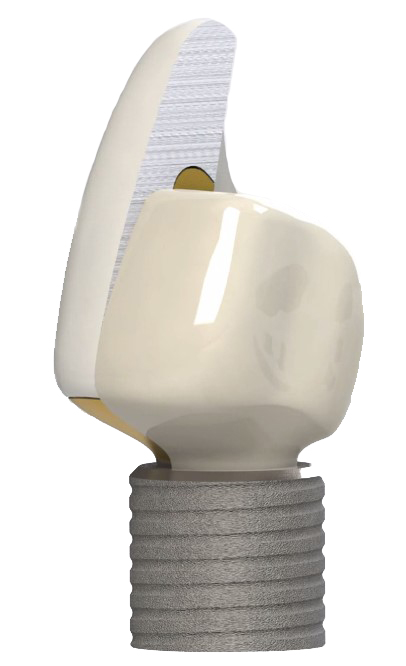 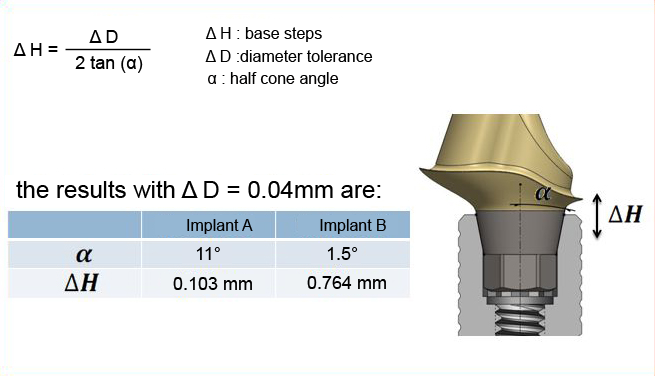 The production tolerances of the implant components are almost kept secret by the dental industry. Normally, the production tolerances are approximately 2/100 mm per component. Manufacturing with low tolerances requires an air-conditioning of the machining center, which is extremely expensive. These inaccuracies, however, results in several errors: at conical systems an offset height may arise of the abutment in the implant, which can amount up to 0.7 mm depending upon the cone angle. For all systems, also flat to flat connections, a distortion of the abutment against the implant may be possible. This typically amounts to 3° at a hexagonal anti-rotation protection. 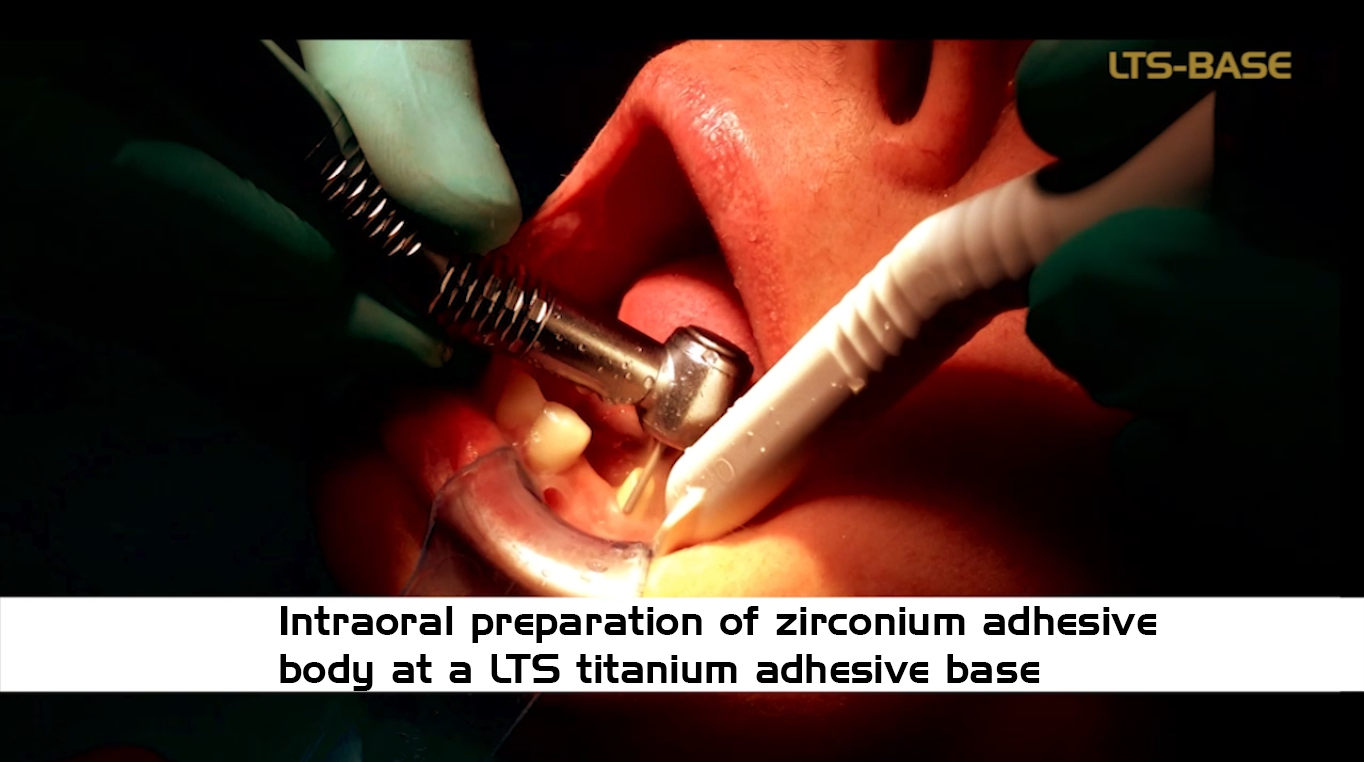 In the „One-Abutment – the first time“ conception just one component (LTS-hybrid-abutment) is used. With lower primary stability maximum two components (abutment + healing cap) are used. So, all impression errors and faults in the implant interface resulting from material tolerances and angulated tolerances do not occur. There is no impression post needed. The impression is taken at abutment-level, not on implant-level. The preparation margin may be intra-orally reground because of the ceramic adhesive body. The impression may be taken subsequently. 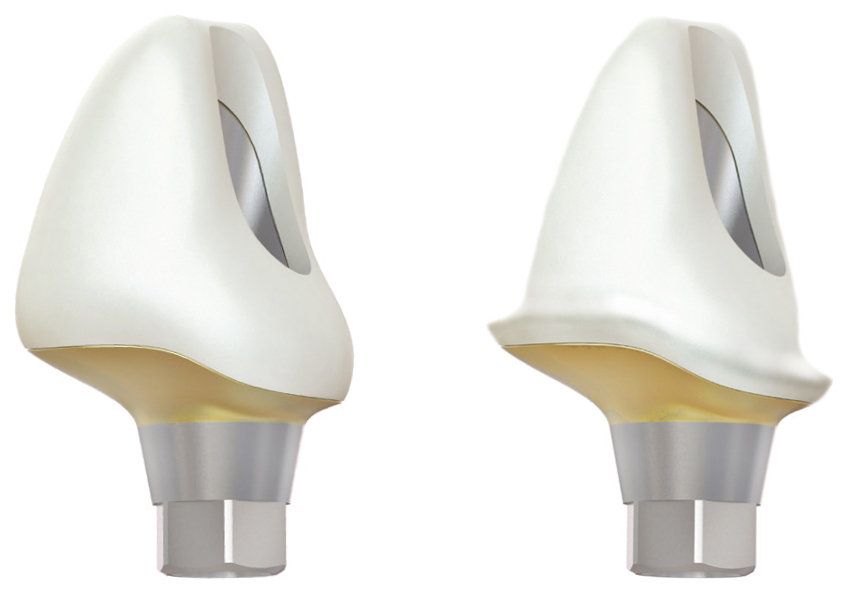 The LTS adhesive bodies are specifically designed for prosthetic restoration of several angulations and mucosal thicknesses at a minimum of dental preparation. With the preparation margin being in epigingival position there will hardly be any risk of storing remaining cement in the sulcus, and the long-term stability of the abutments can also be secured. This is the most frequent complication for cemented solutions. 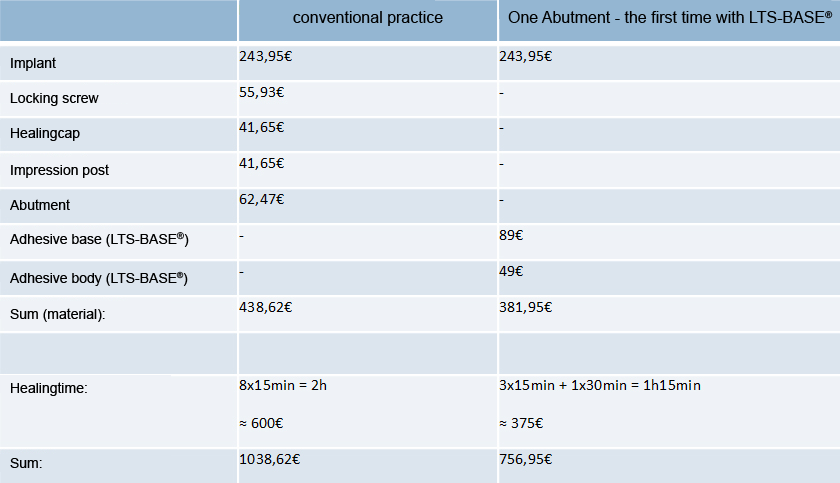 Saving costs is a result of several application potentials: the first argument may be the financial aspect for material and components. Compared with the four standard components (cover screw, healing cap, impression post and the final abutment) is it possible to save approximately 15% of the normal costs applying the LTS-hybrid-abutment the components of which consists of the adhesive abutment and a ceramic adhesive body.An even greater saving potential results from the elimination of dental appointments for exposure, after-treatment, implant casting with the connected replacement of components and optimization of the titanium abutment, outside the medical office. In this case, it is possible to save up to 30% compared with the conventional procedure.Furthermore, the result of the treatment is reachable in clearly less time. Thus, the valuable time for treatment will be available for other problems. 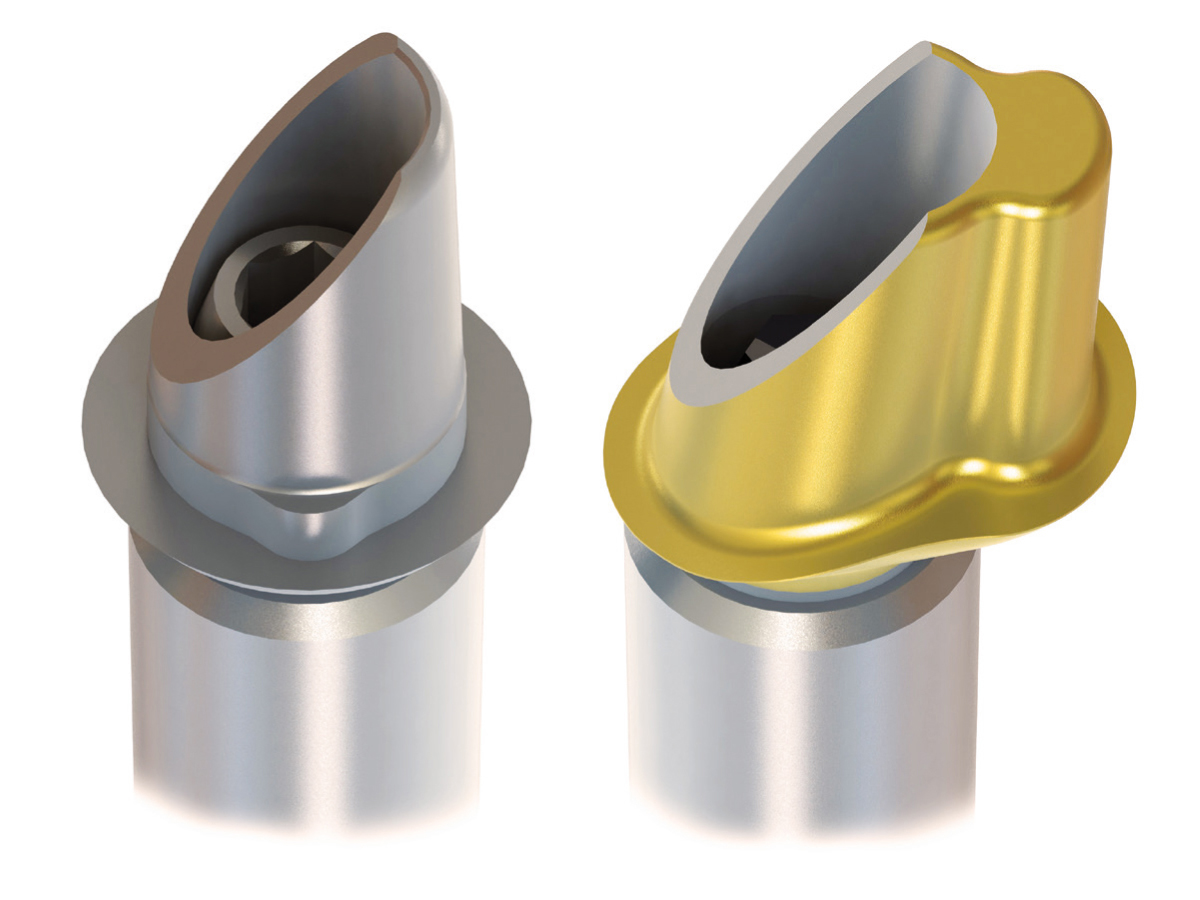 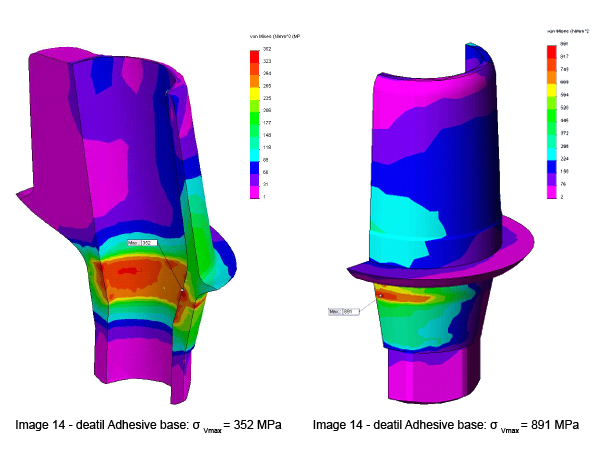 FEM/FEA studies of several abutments for different implant systems have revealed an optimization of the internal geometry of the most abutments being necessary and obligatory.Very often predetermined breaking points can be avoided and the long- term stability could be increased. Nothing is more annoying than an abutment which breaks after a short time even though it was inserted in the right way.

A further problem is the connection to the ceramic adhesive body. At a conventional, rounded adhesive abutment there is not enough retention space for a long-term stable adhesion. The prosthetic restoration can break loose including the ceramic adhesive body and tooth crown. In this case, the removal of remaining adhesive body from the crown is very complex.To prevent that, the LTS base is furnished with the “Backpacker” in Omega shape. It looks like a channel/shoulder/pin-attachment and is shaped conically. It effectively prevents a break off or a release of the ceramic body.

The surface of an adhesive abutment is furnished with macro-retention, which spares the process of sand blasting. Additionally, it allows an optimum adhesive connection to the ceramic body. 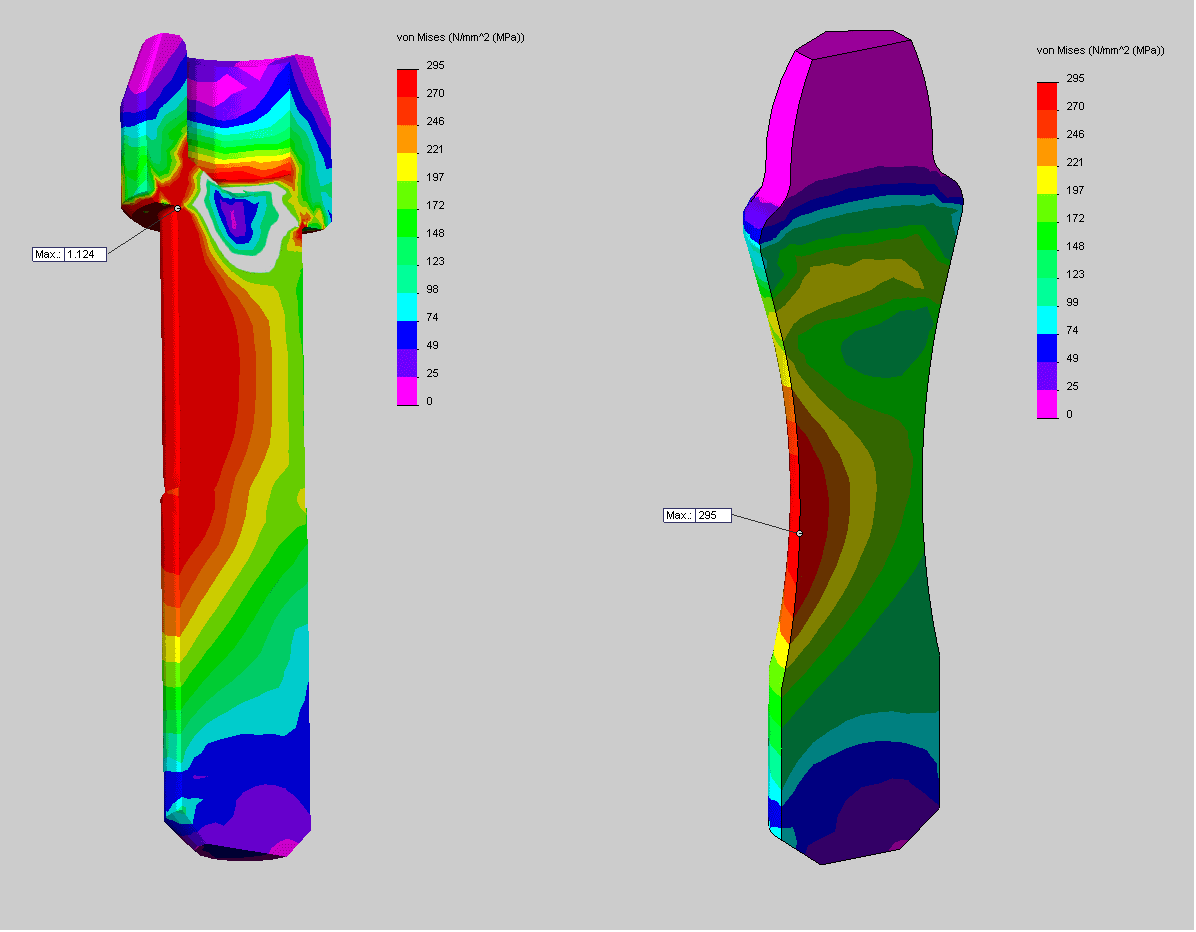 An investigation on the abutment screw is taken as an example for the FEM calculations. The pressure in the screw can be reduced from 1124 N/mm² at a standard screw to 295 N/mm² at a LTS base screw with both having the same tightening torque with the dental ratchet. The comparative study of the LTS base adhesive bodies shows a massive reduction of pressure within the implant connections, which significantly improves their long-term stability.

In a conventional adhesive abutment the maximum pressures may be well above the deformation limit of 780 N/mm of the material used (titanium 5°). 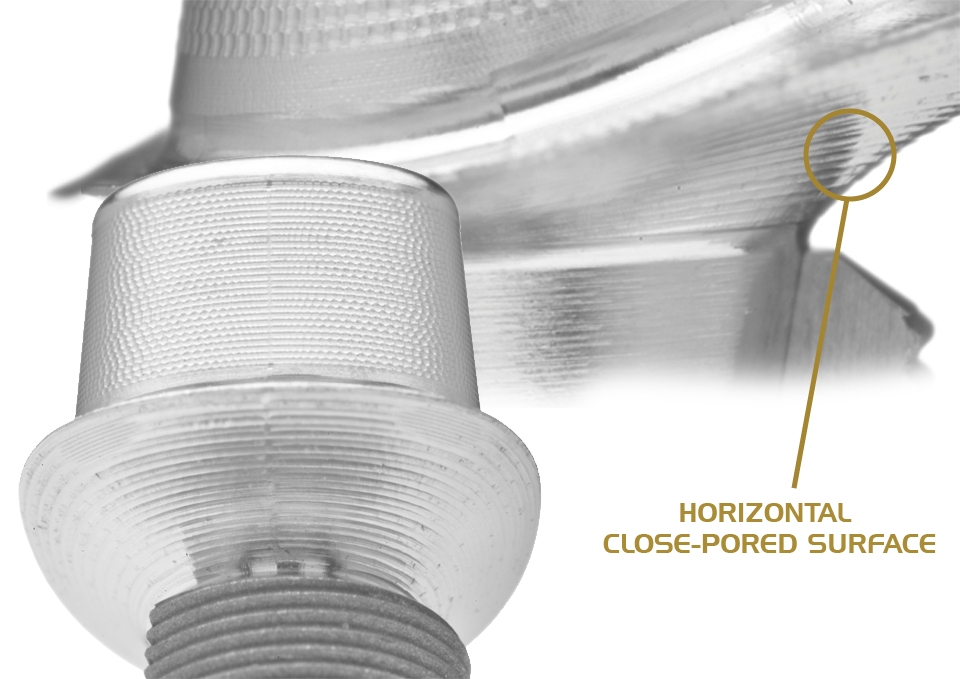 An abutment may even be optimized in the range of biological long-term stability:
To prevent bone athrophy the abutment should follow the bone structure to stick to the biological width. This has not been possible with the adhesive bases available. The LTS-BASE® follows the bone structure and thus avoids bone resorption.Cilinical studies have shown the adverse productivity of a highly polished abutment surface. It would so be easier for the mouth bacteria to protrude alongside the abutment into the depth towards the implant and to initiate an inflammation there.

The NCW design with its wave profile (registered for patent) enlarges the way to the implant shoulder and thus facilitates the connective tissue parts of the soft tissue to become deposited into the abutment.The LTS-abutment surface is closed-porous in contrast to the competitor surfaces. Thus, minerals of the sulcus liquid may be prevented from adhering to the abutment (similar to an infected implant). 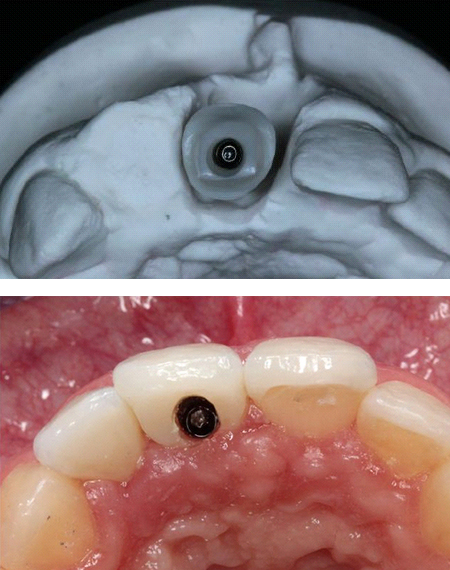 With the help of the angulated screw access channel of the LTS-BASE® such clinical situations may get a prosthetic restoration where an angulation of the crown is required.According to clinical studies this holds true for more than 80 per cent of all cases in the esthetically visible area.

The screw access whole would then directly be positioned in the incisal edge. By means of the angulated screw channel it may be shifted to oral.

Decisive advantages for the dentist from the view of the patient by LTS base:With the tooth shape being adapted to the shape of the natural tooth there are considerably less dirt-collecting recesses where food residues may be caught. The risk of gingivitis will significantly be reduced. As the metal edge is clearly shifted to crestal, compared to a conventional adhesive base, a golden coating and the NCW wave profile that stabilizes the soft tissue the esthetic problem from the point of view of the patient becomes almost improbable (dark metal edge after recession).

There is almost no abutment system which is more scientifically researched than the LTS-BASE®. Currently our adhesive bases are tested at several universities, nationally and internationally. With the help of the knowledge gained they are permanently improved. We are especially grateful to the following universities ( in alphabetical order) for their support and kind help:

Frankfurt for their support in screw mechanics,

Freiburg for information on the mechanics of anti-rotation locks,

Kiel for inputs on adhesion to the ceramic body,

Cologne for inputs on macro-surfaces and mechanical tests,